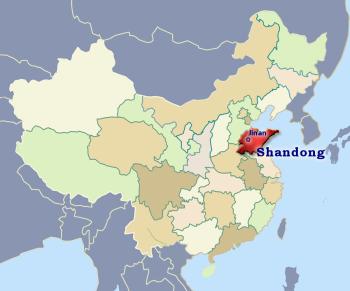 Shandong stands as if an island on the East China Plain, indeed in geological times it was an island before the Yellow and Yangzi rivers joined it to the mainland by depositing rich alluvial soil to form the land to its west. As recently as 1855 the Yellow River's lower course entered the sea to the south of Shandong. So Shandong is set somewhat apart from its neighbors. Mountains make up the central spine of the province and so most people live along the rugged coastline.

With sites sacred to Confucian and Daoist followers there is much to appreciate in the scenic beauty of the Shandong mountains.

Mount Tai is revered not only by Daoists but also Buddhist and Confucians with many shrines dotted over it. It is a UNESCO world heritage site. It is said to have been formed when the Eight Immortals fought the Sea dragon. As Mount Tai is considered the most sacred of Chinese mountains many visitors scale its heights. They follow in the footsteps of Chinese Emperors and even Chairman Mao. Emperor Wudi of the Han dynasty was one of the first Emperors to make sacrifices here. The Emperor would make two sacrifices to Earth and two to Heaven, reporting his achievements of office and praying for heavenly favor. Jade tablets were buried inscribed with his accomplishments. A famous stone inscription is of the Buddhist Diamond Sutra. Traditionally the mountain was held to be the location of a tribunal that judges the deeds of the living and the dead. In many towns all over China sacred stones are said to have come from Mount Tai ➚ with the power to ward off evil. Over the centuries poets such as Li Bai have been inspired by the mountain.

Taishan reaches an impressive 5,029 feet [1,533 meters] and the route to the top has many sculptures, inscriptions, temples and waterfalls. The summit is called Jade Emperor Peak. The Taishan Temple ➚ at the base of the mountain dates back to Han dynasty times and greatly expanded in the Tang and Song dynasties when many splendid halls were built. Well trodden routes lead to interesting temples near the summit. An arduous 1,200 steps lead to Nantian Gate ‘south gate to heaven’ and then the 碧霞祠 Bì xiá cí ‘Azure Cloud Temple’ dating back to the Song dynasty. The town of Tai’an lies at its foot and the Lingyan si ‘Monastery of the Magic Cliff’ is nearby.

Qufu has a set of temples to mark the birthplace of Confucius. These are large and lavish, indeed comparable to the Forbidden City in Beijing, underlining how important Confucianism has been throughout China's long history. The temple at Qufu has 53 ornamental gateways and many halls. It was visited by hundreds of Emperors from the Han dynasty down to the last Qing dynasty. There are many fine courtyard buildings within the temple complex, where wealthy landowners have bequeathed land in Confucius' memory. The Confucian Woods holds monuments to members of the Kong family down the centuries. Inscribed stone slabs (steles) are there in their thousands documenting ancient life in China. The Kong family who are direct descendents of the sage, now in their 83rd generation, claim the longest family tree in the world. Confucius' great hero the Duke of Zhou has a temple close by. Nearby is the only pyramidal tomb in China - to the legendary emperor Shao Hao ➚. Mencius who was Confucius' great supporter and regarded as China's second sage (rather like Plato to Socrates) was born at Zoucheng and there are more modest memorials to him there.

Most people know about Mao Zedong but few realize that in the early days of the Jiangxi Soviet and Long March the leadership was considered joint. General Zhu De became established as the effective and well respected military commander. The partnership of Zhu De and Mao Zedong was complimentary, Zhu headed the military operations while Mao planned and developed strategy, the bond was so close that the leadership was referred to as 'Zhu-Mao'. For the rest of life, although marginalized in the PRC government he was a greatly respected figure, he died in July 1976 just after Zhou Enlai (January) and Mao Zedong (September).
Read more…

Qingdao retains some of its German heritage, the world famous Qingdao (Tsingtao WG) beer brewed here used German know-how. As well as German style beer you can eat German pastries and breads. Qingdao means blue-green island and it remained a small fishing village for many centuries. Cool ocean currents keep the climate cool and it attracts tourists who wish to escape the inland summer heat. There is a park here commemorating the revolutionary writer Lu Xun.

Mount Lao ➚ 3,716 feet [1,133 meters] is near Qingdao, and although less visited than Taishan, is equally impressive. The largest temple is Taiqinggong ➚ dating from the Song dynasty with over a hundred buildings in the complex. Laoshan's clear waters are considered an essential ingredient of Qingdao beer ➚.

Jinan is an ancient city on an important north-south route that crosses the Yellow River; it has many natural springs. It became a foreign enclave in 1906 with a railway link to Qingdao. It was famous for its springs but some of these have now dried up. Zibo is now a center for large scale coal mining. Xiaolipu is a village with one of the oldest standing domestic building - from the Han dynasty two thousand years ago.

Penglai Pavilion ➚ on the northern side of the peninsula is one of the Four Great Towers of China. It is considered to be the home of the Eight Immortals of the Daoist tradition. Yantai ➚ to its east, sometimes known as ‘Chefoo’, is an attractive fishing port with sandy beaches. Close to Qufu at nearby Zoucheng ➚ is the birthplace of the second sage of Confucianism: Mencius.

Weihai is another coastal resort. It was briefly a British colonial territory from 1902-30 to act as a naval base to defend the sea route to Tianjin and Beijing. At a time of upheaval in China it proved a quiet and peaceful backwater. It is now a prosperous port.

The ancient tradition of kite flying in China continues at Weifang where there is a kite museum and an international kite festival each year.

Shandong has been long inhabited, archeologists have unearthed evidence of the Longshan Culture ➚ 4,500 years ago in the province. It became part of China in the Eastern Zhou dynasty where it was under the control of the Qi and Lu kingdoms. The capital of the Qi kingdom was at Yingqiu ➚ (Linzi) near Zibo. It was at this time the great sage and philosopher Confucius was born at Qufu in Shandong. Later in the Three Kingdoms period it became part of the Wei kingdom. Up until then it had been sparsely populated, during the Western Jin dynasty Han people from the north began to settle in large numbers. Shandong then suffered centuries of turmoil as it was on the north-south divide of China. It became a stable, governed province again only in the Ming dynasty .

The capital of Japanese controlled Manchuria (1933-45) was within Jilin. Here Emperor Xuantong (Puyi) was placed on the throne and Changchun renamed 'Xinjiang' (New capital). During the Japanese occupation industrial development was rapid, and the area remains heavily industrialized.
Read more…

In Qing times it was subject to foreign coastal colonization, Germany occupied Qingdao and Jinan while Britain took Weihai as concessions. The fairly cool maritime climate of Shandong proved attractive to Europeans and the eastern ports controlled the sea route to Tianjin and Beijing. The influx of foreigners led to tensions with the local people and it was in Shandong that a movement formed that was to become the Boxer Rebellion. During the Qing the province was barely under Imperial control with many groups and secret societies vying for power and so many Shandong people emigrated to Manchuria to escape the conflict. Japan invaded the peninsula in 1914 under the pretext of ejecting the defeated Germans. In the following Treaty of Versailles ➚ Japan was formally handed Germany's sphere of influence in Shandong. It was only after the defeat of Japan in 1945 that it become a fully integrated Chinese province once again. Since Deng Xiaoping's reforms it has opened up to trade with South Korea across the Yellow Sea, and South Koreans have invested heavily in Shandong's rapid industrial development.

Shandong has become a major industrial province in the last 30 years with the third largest population of nearly 100 million people. It has large deposits of coal and oil and makes many domestic goods. It has the best gold reserves and rates second for diamonds within China. The fringes of the Yellow River plain provide good agricultural land for wheat and potatoes. The fertile valleys to the west produce cotton; soybean; peanuts and tobacco. The warm, frost free climate allows vineyards and orchards to flourish.

Together with tea and silk, porcelain from China is its most famous export. Prized the world over, high quality porcelain commands high prices at auction. Like silk the secret of its manufacture was a closely guarded secret for centuries.

China now has some of the top universities in the world. Our site give all the details: student numbers, location, ranking and a bit about their history.
Please wait...
Downloading information about character