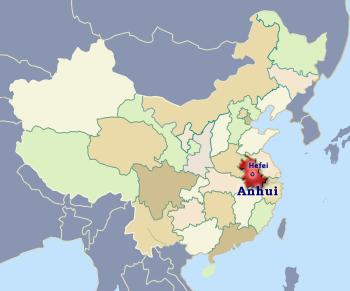 Anhui can claim to be at the heart of Central China as it straddles the mighty Yangzi river. The northern portion is part of the flat, fertile North China plain and is noted for wheat and rice production. There is a vast coalfield and iron industry west of Huainan. South of the Yangzi, the province is more mountainous and sparsely populated. Economically it remains somewhat behind its neighbors Hubei and Henan.

The full astrological cycle of years is 60 years rather than 12 because each year is associated with one of the five elements 12 x 5=60. The start of the new cycle is considered unlucky and to counter the ill effects some Chinese will wear lucky red underwear to counter the effects.
Read more…

Famous people from Anhui include: Bao Zheng ➚, the model for selfless dedication to public office; Cao Cao the villain of the Three Kingdoms period; Zhu Yuanzhang founder of the Ming dynasty and reputably both Lao Zi and Zhuang Zi founders of the Daoist tradition.

一字之师
Yī zì zhī shī
A teacher of one word
Needing only a slight change to become perfect. Praise for work that is nearly perfect but requires an expert to complete. The story is of a poem that was greatly improved by a great poet changing just one character.
A finishing touch
All about Chinese proverbs

A notable attraction of Anhui is scenic Huangshan (Yellow Mountains) in the south, a very popular mountain range to climb for Chinese as well as foreign visitors. It is named after China's legendary first Yellow Emperor who is reputed to have visited here. It has rocky, granite peaks and pine trees growing right up to the summit. A famous view is of Huan Ke Song ‘Welcoming Guest Pine’ at the start of the trail, reputed to be 1,000 years old. Many people gather at sunrise to see the sun shine through iridescent mists at the summit. The walk to the top can be spread over several days with ancient temples and viewing points along the way. Tang poet Li Bai labeled the mountain a ‘Golden Hibiscus’. Hot springs are found at the bottom while near the top Jade Screen Pavilion ➚ offers panoramic views often with the mountains shrouded in mist. Tiandu Peak ➚ which can be reached by a stone walkway just 164 feet [50 meters] short of the summit ‘Lotus Flower Peak’ 6,115 feet [1,864 meters]. There are hotels, cafes and shops high up in the mountains serving the continuous flow of visitors. Tunxi is the nearest large town and has many fine examples of traditional architecture.

Other places to visit in Anhui

Mengcheng has the Song dynasty Chahua Pagoda. It has 13 levels and stands 106 feet [32 meters] high. Fengyang is associated with the ancestors of the first Ming Emperor Zhu Yuanzhang and was planned as a major city but was never completed.

In the mountains in Yixian county are two ancient villages Xidi and Hongcun ➚ undisturbed since Ming dynasty times and on the UNESCO World Heritage List ➚. Shexian county (formerly called Huizhou) also has Ming dynasty buildings. Jiuhuashan ➚ 九花山 ‘Nine Flowers Mountain’ sacred to Buddhists rivals Huangshan in scenic beauty - there are over sixty temples along the path to the summit. The city of Chaohu is named after the large lake to its west. Both Huangshan and Qimen are famous for their teas; Huangshan for green tea ➚ and Qimen for black tea ➚.

Historically the northern part has been subject to severe flooding from the Yangzi, and centuries ago, by the Yellow river too. The legendary Yu the Great is said to have worked on flood prevention measures on the Huai, Yangzi and Yellow Rivers. There schemes were then taken up by Emperor Qin Shihuangdi.

Anhui became part of the ‘recognized’ nation of China over 2,000 years ago and was settled during the Han dynasty. Hefei, at the center of the province, is the provincial capital; it has developed rapidly as an industrial center since the founding of the PRC. Ma'anshan is one of the larger heavy industrial centers. Up until 1662 it formed with Jiangsu the central province of Jiangnan. The name for Anhui is formed from the names of two ancient cities Anqing (安庆) and Huizhou in the far south near Huangshan. The province is well known for the production of paper, ink and ink-stones; as these are treasures of the calligrapher, it has a fine literary associations.

University of Science and Technology of China 中国科学技术大学

The University at Hefei was founded by the Chinese Academy of Sciences under the leadership of Guo Moruo ➚ to promote research into science and technology. Since its foundation in 1958 it has broadened its scope and is one of the top Universities in China.. Undergraduates: 7667, Postgraduates: 8921, International students: 49, GP World ranking 113

When Chinese style ruled the world

When the Jesuit mission returned reports of the splendors of China in the early 17th century a fascination for anything of the exotic Chinese style took hold. As tea drinking became very popular, China porcelain came into great demand. Soon this spread to all things Chinese and Chinoiserie was the height of style for about 100 years.

Read all about Beijing the historic and bustling capital city of China. Our description includes a detailed map of the central area and travel guides to all the important attractions: Forbidden City; Summer Palace; Temple of Heaven; Beihai Park; Ming Tombs and Tiananmen Square.
Please wait...
Downloading information about character