The Climate of China

This chart shows the huge temperature range of the climate of China. For climate profiles of individual provinces please see the individual province descriptions. The average temperature and rainfall is weighted according to each province's area and because of the vast area of Tibet and Xinjiang provinces it is generally lower than would be expected. In winter and spring an anti-cyclone often sits over Mongolia bringing east and south-easterly winds. In winter extremely cold Siberian air is drawn into north-east China. In summer and autumn the prevailing wind is reversed except for the dry north-west; allowing moist, warm air from the South China Sea to move north. Depressions generally track westward, bringing welcome rain to inland provinces. Rainfall varies considerably from year to year in inland areas leading to risk of drought or flood, particularly during the summer. Typhoons from the South China Sea are a frequent hazard in late summer and autumn, affecting mostly Fujian Guangdong and Zhejiang.

Visitors generally find spring and autumn the best times to come to China in order to avoid the extremes of hot, wet and cold. For all about visiting China see our visitors guide. 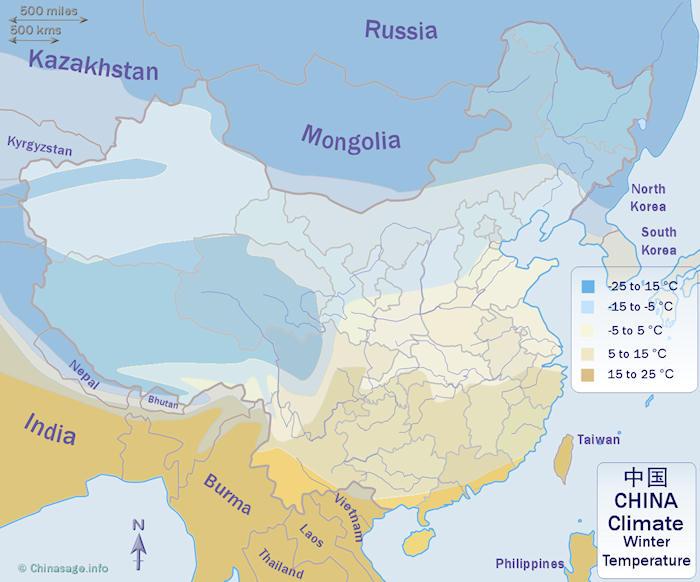 The average temperature over China in winter (January) demonstrates the extent of cold conditions over much of China. Cold north-easterly winds result in very low temperatures as far south as Beijing. The high Tibetan plateau is very cold. Only the southernmost coastal fringe retains temperatures over 59 ° F [15 ° C]. The extreme northeast is coldest with temperatures as low as -22 ° F [-30 ° C] at times. 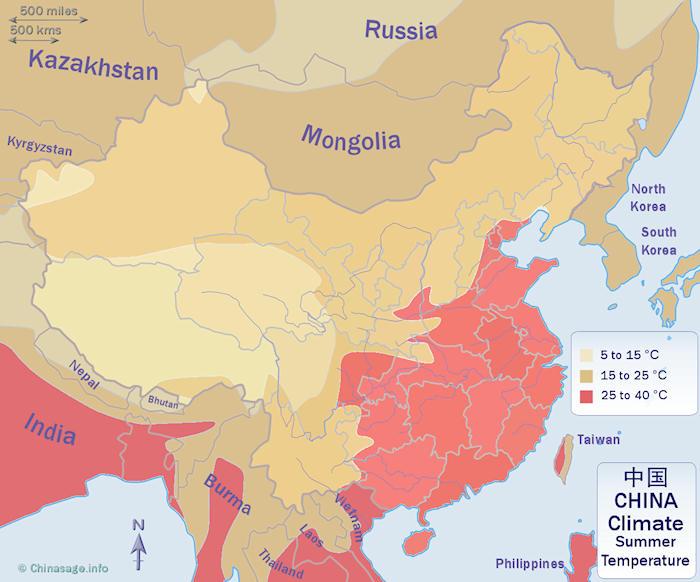 This map shows the average temperature over China in summer (July). Southerly winds bring frequent rain and high temperatures to most of southern China; the Yangzi basin and as far north as Beijing. Several large cities exceed 104 ° F [40 ° C] on hot days. Chongqing; Wuhan andNanjing are known as the 'three furnaces' of China 三大火炉; only the high Tibetan plateau remains cool. The long warm period in the south allows the growing of two or three crops of rice. 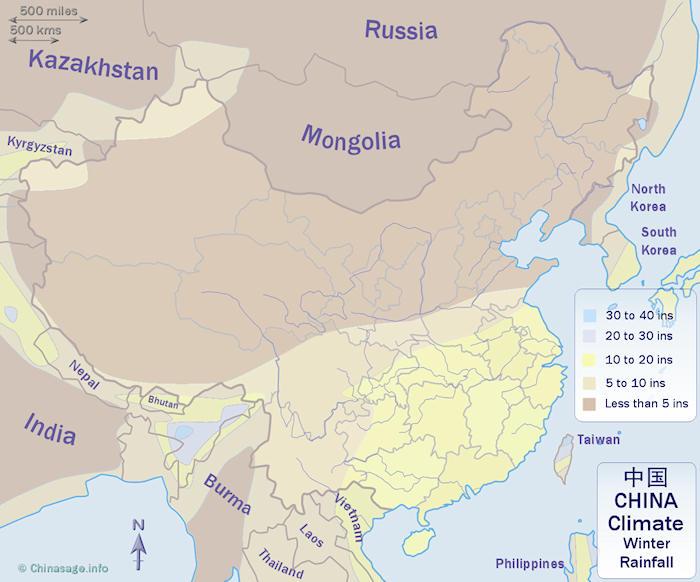 China in winter (November to April) is generally dry. The bulk of China is under the influence of cold dry air from the north east and there is little rain or snow. Far eastern Xinjiang receives some rain, south of the Yangzi moderate rainfall continues all year round. 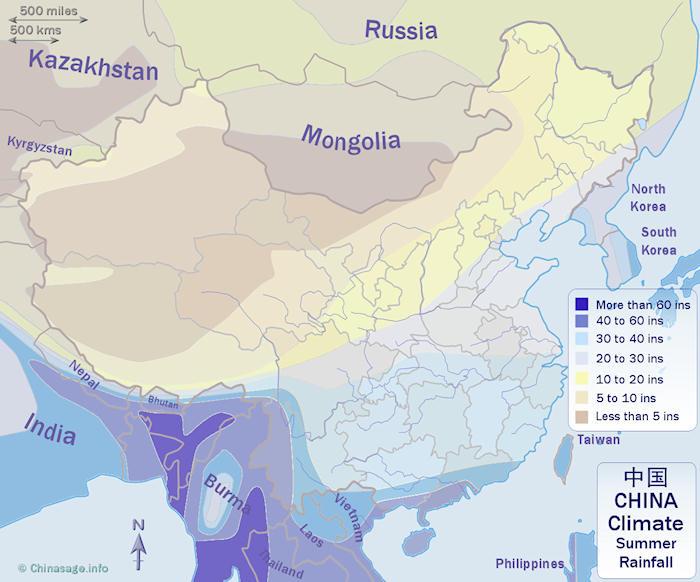 In summer (May to October) China receives most of its rain. Monsoon rain affects southernmost Tibet and Yunnan. Frequent rain bearing depressions moving in from the South China Sea bring heavy rain along the southern coast. The rain reaches as far north as the Yangzi, although the amount of rainfall drops off gradually towards Xinjiang in the north-west.

All about the provinces that make up China

For each of the 33 administrative regions (provinces and major cities) we give a brief history, guide to visitor attractions as well as airports, universities, climate and major towns and cities Read more…

These are the provinces with the coldest/hottest and driest/wettest statistics in China.

The wettest provinces (as measured at the provincial capital) for each month of the year. In spring it is Jiangxi while in autumn/fall it is southernmost Hainan Island.

The provinces (at the provincial capital) with the least rainfall for each month of the year. They are all in the west or north-west of China.

Provinces with the highest maximum temperature for each month of the year. Southernmost tropical province of Hainan features heavily, but in summer/autumn provinces further east are even hotter.

These are the provinces with the lowest temperature for each month of the year. The northernmost province Heilongjiang is coldest in winter, but in summer it is Tibet in the west.

Statistics on all the major cities in China. Gives Population, Chinese name and shows map of location within China as well as calculating distances to any other Chinese city. Read more…