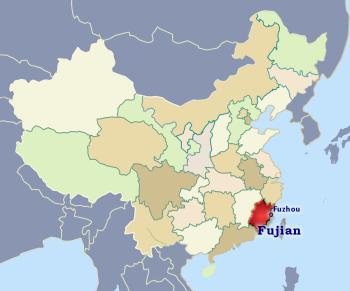 Fujian is a mountainous province that looks primarily out to the Taiwan Straits and East China Sea and as such it has a certain feeling of independence from China. Indeed it remained the semi-independent kingdom of Min yue ➚ (闽蛮) for the period 330 to 110 BCE before it was conquered and assimilated by Han Emperor Wudi. Some people still refer to the inhabitants as Min people. In the last days of the Song dynasty (1276-1279) Fujian was the last refuge from the conquering Mongols. It resisted the Qing conquest in 1644 the longest of all the provinces through the efforts of General Zheng Chenggong ➚ ( Guoxingye 国姓爷 Koxinga WG) who grew up near Quanzhou and used Xiamen as his base. Later in 1660 a Japanese invasion of 6,000 pirates and looters ransacked the province. There is a scattering of old attractive ports and islands along the rugged coastline.

Universal Studios makers of such films as Harry Potter, Jurassic Park, Transformers, Minions, The Great Wall and Warcraft have chosen Beijing for their fifth theme park.

world but also new ones like ‘Kung Fu Panda Land of Awesomeness’.

It is jointly run by Beijing International Resort Co. and Universal Parks and Resorts and cost about $7.7 billion to build. It is located 20 miles east from the city center but does have its own subway station at the end of the Batong line. />
Read full story…

Xiamen (厦门) is an ancient trading port with historical links to the Portuguese, Spanish and Dutch. After the Opium Wars Xiamen came under the control of the British for fifty years. Better known as Amoy following the local dialect, the port and island of Gulangyu faces the island of Taiwan. There are many picturesque islands dotted around Xiamen. Nanputuo Temple ➚ is a famous Buddhist site. Gulangyu island was developed by Britain together with other foreign powers as an enclave, it has long been associated with egrets ➚ and attractive gardens. The Garden of the Countless Rocks (Wanshi Gongyuan) is close by and has pretty landscaped parks and temples. The Lu Xun Memorial Hall is a more modern attraction, commemorating the noted revolutionary writer who lived here in 1926. Lin Zexu ➚ the famous Commissioner who was tasked with stopping the import of British opium was born in Fujian. There is also an Overseas Chinese Museum here documenting the lives of the many who emigrated to foreign lands.

All the tea in China

Tea originates from China, it has been drunk there for thousands of years. It took a long time to find the best way to select the best varieties and process the leaves. Initially the very bitter flavor made it suitable only as a medicine. Our guide covers history of tea , its preparation, growing and appreciation. Read more…

The port of Quanzhou (泉州) was once more important than Xiamen, and was visited by Marco Polo and many other foreigners. Quanzhou, formerly known as Zayton or Chinchew, developed during the Tang dynasty as sea trading began to replace overland transport over the Silk Road to become one of China's four main ports. A sunken ship from the 12th/13th century was discovered in the bay in 1974 and is now exhibited in a museum there. The streets were lined with coral bean trees ➚ and it was known as the ‘Coral Bean City’ by foreign traders. Kaiyuan Temple ➚ is an amazing example of Tang dynasty architecture with one hundred stone pillars, it was originally named the Lotus Flower Temple. Here, a 900 year old stone bridge crosses the Luoyang River. It has seven pavilions and nine pagodas on either side. Confirming the dominant role of Muslims in early sea trade, there is a cemetery at Lingshan dedicated to foreign traders and there is Qingjing mosque dating back to 1010. It was from here that Muslim Zheng He set out on his impressive voyages of discovery.

The province of Chongqing is a recent creation; it was split away for Sichuan in 1997. Chongqing on the mighty Yangzi is the natural gateway into Sichuan, the ancient kingdom of Shu. The reason for the split was that Sichuan had a way above average population and area compared to other provinces.
Read more…

Other places in Fujian

By contrast the capital of Fujian Fuzhou (福州) has the feel of a modern industrial city, but it was a busy port all the way back in the Tang dynasty. There is the Hualin Temple which is of Tang date. Mount Gushan ➚ to the East has a famous Buddhist Yongquan (Boiling spring) temple of similar date. It became a treaty port under foreign control in late Qing times.

Not far away up the estuary from Xiamen is the ancient city of Zhangzhou, it is sited on the Jiulongjiang (nine dragon river) it boasts many temples including the Southern Mountain Temple ➚ and the Precious Hall of the Great Hero ➚.

Meizhou Island has many temples dedicated to the Goddess of the Sea Mazu, very important to all the many seafarers of the province.

Inland near Yongding are the ancient Tulou ➚ houses of the Hakka people can be seen at Fengsheng; Gaobei; Tianluokeng; Hongkeng and Chuxi. These strange circular multi-story buildings house a whole community and are set amidst the tea growing areas of the mountains (particularly Oolong tea ➚ and Lapsang Souchong) are Fujian's most famous and important crop. The moist air that often hangs over the mountains makes Fujian an ideal location for the growing of tea. The picturesque mountains of Wuyi; Tailao; Nanji; Zhiti; Dongyan and Magu are worth a visit and many of these have Buddhist and/or Daoist temples on them. The high mountains still harbor a few, rare tigers. Jinhu Lake ➚ is widely appreciated for its scenic beauty.

September's quiz is just as difficult, how well do you know China?

Kowloon town within the city of Hong Kong means what in English? Reginald Johnston was famous in China in what position? What does a carp symbolize a wish for in artwork? A Jewish community has lived for many centuries in which Chinese city? What are foxes associated with in China?

Fishing is a major industry of Fujian. The rocky coastline includes many islands and sandy beaches including those near Xiamen; Pingtan and Putian. In scattered towns there are remnants of old folk traditions such as Quanzhou puppetry and a local, distinctive Opera tradition. Handicrafts in lacquer-work, bamboo and shells are available widely.

Many of the Chinese diaspora originate from Fujian, some settled on the nearby island of Taiwan which was administered as part of Fujian province in Qing times. With only very poor roads over the mountains, the sea ports of Fujian were used by emigrants to sail away to a new life (and many as ‘coolies’). Hakka people live in the south west of the province and still use their own language.

More recently the defeat of Chiang Kaishek and the Republic of China Nationalists in 1949 led to continuing friction between Taiwan and the Communist mainland. The isolated small islands (Jinmen; Mazu islands) within easy sight of the Fujian coast ‘belong’ to the Taiwan government rather than Fujian and bristle with military defenses. The large, scattered diaspora of Fujianese in Taiwan and throughout south-east Asia has helped their families financially and funded industrial development and universities, as the emigrants still remember their ancestral roots and send money home. Continuing improvement of relations with Taiwan is bringing new opportunities for development.

Fujian has a rocky coastline and a mountainous hinterland. Fishing is the main coastal industry while inland it is forestry and tea plantations. It has warm frost-free winters and hot summers, but is subject to damaging floods when typhoons move inland from the East China Sea in late summer.

The university founded in 1921 was the first to be founded by overseas Chinese as Amoy University. It is ranked within the top 20 universities in China. Lu Xun is the most famous figure associated with the University.. Undergraduates: 17847, Postgraduates: 10286, International students: 2800, GP World ranking 406

The institution of Emperor, as head of the Chinese family of people, lasted for thousands of years and to some extent lives on with the Presidency. In China there has been great respect for the Emperor/President who in turn is expected to rule wisely with the best interests of his subjects in mind. To early European visitors to China the structure was considered close to the ideal form of society.

Our visitor attraction page gives a wide range of places to visit all over China, and not just the obvious ones. Of course its necessary to include the Forbidden City and the Great Wall but how about the Stone Forest and Dali Lake?