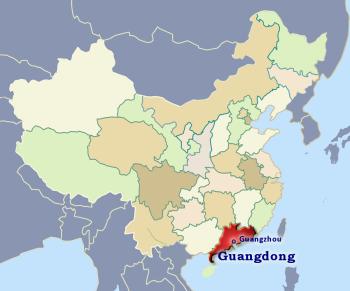 An unusual Guinness world record has been set. In the south of Hainan Island, the southernmost inhabited land in China, a group of 110 divers have dressed as merpeople to set the record. Swimming with only a tail rather than two legs requires new skills to be mastered. You can see a video here. It was held at the Atlantis Sanya resort. Diving has recently become a very popular sport.

Guangdong has been China's southern gateway to the world for many centuries, with trade of all kinds dominating the province. Guangzhou (named Canton by the Portuguese and known by that name until 1949) is positioned close to the estuary of the 珠江 Zhū Jiāng (or Pearl River) providing easy access to the South China Sea. The Pearl or West River is the third largest in China and drains much of the provinces of Guangxi and Guangdong. It has a complex pattern of outflows, one channel runs through Guangzhou while the main one runs to the west of Macau. The southern coast is dotted with small islands (over 700). It receives copious water from the rivers that flow south from the province's northern mountains to the sea. The coastal belt has fertile alluvial soil and the rocky coastline gives excellent fishing grounds. The port of Guangzhou opened to foreign trade in 1685, and for two centuries had the monopoly of all foreign sea trade. Precious and fragile Jingdezhen porcelain was carried over the mountains from Jiangxi to Guangzhou for export to Europe.

Guangzhou (a.k.a. as Canton)

Guangzhou, the provincial capital, is called the ‘City of the Rams’ after a legend about its foundation. It is said that five gods came to Guangzhou in the form of five rams, each with a sheath of rice in their mouth while the city was in severe famine. This precious food was distributed to the local people. The legend is commemorated by a famous sculpture of five rams in Yuexiu Park ➚. Guangzhou has been involved in trade for over two thousand years and dates back at least to the Qin dynasty. Guangzhou is composed of three distinct districts, the old inner city protected by an ancient wall.

Centuries of conflict and rapid development have made traces of the ancient heritage hard to find. The Nanyue Palace Gardens show archaeological remains of the fleeting Nanyue kingdom founded on the break up of Qin dynasty China. It is well known for flowers, and has a large, annual flower fair just before Chinese New Year. Yuexiu Park is a popular park with pavilions, lakes and covered promenades, it has a memorial hall to Sun Yatsen who was born not far away. Zhenhai Tower, built in the Ming dynasty to advertise China's power to visiting ships, has become the provincial museum.

Huangpu Military Academy ➚ Whampoa WG was located to the East of the City on the Pearl River and is now a museum. Yellow Flower Hill (Huanghuagang 黄花岗起义) is a memorial garden to 72 the revolutionaries who died in Sun Yatsen's 1911 uprising ➚. The Memorial Garden to the Martyrs ➚ commemorates Chiang Kaishek's attack in April 1927 against his Communist allies when 5,700 people were massacred. There are a number of temples in the city: Temple of the Six Banyan Trees ➚ Liurong Si has a famous pagoda and was founded in 479; Hanlin Temple founded 526;Five Genies Temple ➚ and Guangxiao Si ➚ which may be even older - 4th century. There is also an ancient mosque Huaisheng founded 627, the oldest in China. The large Catholic church was built in 1860 mainly by the French community.

For many years a famous trading exhibition has taken place showing the latest goods and techniques. The ‘Canton Fair’ is held in the Pearl River Square. People from all over China used to come to see the exhibition.

Other places to visit in Guangdong

Baiyun mountain just 9 miles [14 kms] north-east of Guangzhou offers commanding views of the city. Foshan to the south-west of Guangzhou has a fine Buddhist shrine and famous for pottery, handicrafts as well as soy sauce. It also has the Qinghui Garden of Ming dynasty age. Zhanjiang to the north of Hainan has some French colonial heritage and is China's naval base for the South China Sea as well as boasting tropical coral reefs. Shantou on the other hand was another treaty port taken over by the British after the Opium Wars when it was known as Swatow. Part of the old city has a fine temple and old colonial buildings.

Shiwan is famous for its ceramics, particularly decorative work. Huaxian is near the Taiping leaders birth place and has a small museum. Shenzhen is an immense modern city created from very little since 1980 – China's ‘Silicon Valley’. Chaozhou was an important city during the Ming dynasty and has fine city walls. Xinghu Lake ➚ in Zhaoqing is a wetland nature reserve particularly for birds; Mount Danxia, Renhua ➚ in northern Guangdong has spectacular mountain scenery; Mount Dinghu, Zhaoqing ➚ is another forested mountain, Matteo Ricci spent some time here in the 16th century; Yangjiang Kite Festival ➚ is the largest in southern China and takes place in October. Seven star rocks (Qixingyan) near Zhaoqing west of Guangzhou are made of towering limestone crags. The Conghua Hot Springs are located 50 miles [81 kms] north-east of Guangzhou has been developed into a major health spa. The water reaches 160 ° F [71 ° C] in one of the eleven hot springs.

The Cantonese language or 'Yue' language is still spoken by over 50 million people in Southern China (Guangdong, Guangxi, Hong Kong and Macau). Although the written form is very similar to Mandarin the spoken language is very different. As many Chinese people have migrated to other countries around the world you will often hear Cantonese in Chinatowns and Chinese restaurants. Read more…

The province of Guangdong became part of China as long ago as the Qin dynasty. When the Qin empire collapsed the area broke away as the kingdom of Nanyue until re-unification in 111BCE. At this time Guangzhou was called Panyu ➚. It has been subject to immigration and emigration over the centuries and there is a good mixture of peoples within the province. It became involved in overseas trade from an early date, it was sacked by the Arabs and Persians in 758CE. International trade continued to grow, and in the Tang dynasty (879CE) Huang Chao led the Guangzhou massacre ➚ in which many foreign merchants died. As the southernmost province it was the last to be conquered by the Mongols – at the Battle of Yamen in 1279 (near Jiangmen). The most widely spoken dialect after Mandarin and Wu is Cantonese or 'Yue', and due to emigration Cantonese is widely heard outside China too. For example English uses the Cantonese pronunciation of 锅 'wok' ➚ rather than the Mandarin 'guō'. Local people consider themselves Tang Chinese rather than Han Chinese as they do in northern China because of the flourishing of culture in the south in Tang dynasty times fueled by the migration of many people from the north. There has always been a sense of independence from, and rivalry with, Beijing far to the north.

Guangdong as the only port allowed to trade with foreigners became the flashpoint for the Opium Wars. Much inland transport came into the province over the hills bordering Jiangxi at the Mei Guan pass and then down the Bei River to Guangzhou. All foreign trade from 1757 to 1841 was through the Cohongs ➚ on Shamian island, the only place foreigners were allowed to set foot on Chinese soil (it's now a popular tourist destination). Later the province was the crucible of the Taiping Rebellion (1850-64) when Hong Xiuquan led a revolt against the Manchu rulers based on a strange reading of Christian theology and a smattering of other philosophies. The melting pot of cultures at Guangzhou created the necessary conditions for such a revolt. After Hong Kong was ceded to Britain in 1842 France leased Guangzhouwan in 1898 as an extension of French Indo-China. Later on in 1895 and again in 1917, it was the turn of Sun Yatsen to foment revolution in Guangzhou when he set up his headquarters there. In 1926 the First United front of Communists and Nationalists set off from Guangdong on the Northern Expedition in an attempt to unify China under the Republic.

Rivalry with Hong Kong after the opening up of China has led to rapid industrialization of Guangdong in the last 30 years. For many years it has had the highest GDP of any province in China (if Hong Kong and Macau are included). A transport link over the Pearl Estuary from Hong Kong to Macau and Guangdong is opened in late 2018 which will open the estuary area for further development. New cities such as Shenzhen have been created within special development zones along the coastline. Up until 1988 the island of Hainan was administered as part of Guangdong. Notable universities include Jinan ; Sun Yatsen and Guangdong.

Guangdong has a sub-tropical climate. Frequent rain and fog create a humid climate almost all year round. Tropical crops include lychees; bananas and, further to the north tea. It has the highest population of any province in China - over 100 million. Guangdong is home to a number of ethnic minorities in the mountainous north. It is heavily industrialized and prosperous with rich farmland. Many industries are based on food processing and there is considerable silk processing too.

Sun Yatsen founded this University back in 1924 shortly before his death. Guangzhou was his power base in southern China. With Sun Yatsen's qualification in medicine it is no surprise that it has a strong medical research center. It also has high achieving faculties in business; humanities; politics and computing.. Undergraduates: 32690, Postgraduates: 21610, International students: 3217, GP World ranking 307

Although many think that Chinese people are all the same there are many different ethnic groups that make up China (55 are recognized). The mountains of south-western China in particular are rich in diversity offering a range of customs and traditions.
Please wait...
Downloading information about character